Among my favorite books when I was a child was an elegantly illustrated volume titled Bobra of Bali. In this book, I read of life on a beautiful island, where rice grew in terraced fields, children wore sarongs and went barefoot, women went to temple with towers of food and flowers balanced on their heads, and festivals were celebrated with gorgeously and fantastically costumed plays and dances.

A few years ago, I learned from friends that Bali was still worth visiting, and that it was in many areas unchanged from the images I had of it. It didn’t take me long to decide to go.

In Bali, I spent my first few nights in Kuta, a center of tourism conveniently near the airport. This is where the Australian surfers, French and German honeymooners, and Japanese shoppers come in droves, to enjoy the perfect beaches and take advantage of the bargains on sarongs, wood carvings, jewelry, and more. (Though you have to know what you are allowed to bring home, as some of the exotic crafts being offered utilize restricted materials, such as the shells of endangered tortoises.)

The bungalow I had at the Ramayana Lodge, just off the main street, was nestled in a riot of greenery. The lodge, built to shut out street noise, was a wonderful oasis, with gardens and pools, and was only a block from the beach. Still, I didn’t want to stay long in Kuta—though I could appreciate what it represented. The places in Bali that are overrun by tourists make the preservation of Bali possible. If it were not for tourist dollars, the ancient art forms would have died out long ago. But today, a good living can be made by painters, carvers, batik makers, jewelry makers, musicians, and dancers.

I hired a driver and guide (actually cheaper than renting a car—and much safer, given the roads once you’re out of town), and took off to see the island. I visited Tanah Lot, a little hill-top temple that is cut off when the tide comes in, and watched the sunset at Uluwatu, where a cliff-top temple is ruled by its resident monkeys. My guide arranged for me to attend a Barong dance. I nearly wept for joy when the fantastically costumed creatures I knew from my book leapt into the flower-decked courtyard, acting out their story accompanied by the exotic sounds of the gamalan band.
We drove north, visiting temples—Tirta Empul, Goa Gajah, and the “Mother Temple,” Besakih—and enjoying vistas of the island’s mountainous interior. After a couple of days, we headed for Ubud, the cultural center of Bali. I had asked my guide to arrange for me to stay in Ubud, and he had located a little bungalow nestled amid exotic trees and flowers. The room was minimally furnished, and I had to buy my own toilet paper, but it was still charming, with a giant bamboo four-poster bed and comfortably-furnished balcony overlooking terraced rice paddies. Breakfast was included, and it was dead cheap. I asked my guide to return in three days and said farewell.

Ubud is not untouched, but is still gloriously Balinese. And I only had to get a block off the main street to find the Bali of my book, with thatch-roofed huts at the edges of rice paddies; women using long, feather-tipped sticks to “herd” ducks; “houses” that consist of walls around open courtyards, with a raised step to keep out evil spirits—but no door. I visited the Monkey Forest, with its immense banyan trees, dark temples, and large population of monkeys. I wandered the streets and soaked up the culture. I saw dance performances, visited temples—and shot a lot of film. Toward the end of my second day, I was delighted almost to the point of giddiness to see the women of Ubud heading for the temples—with towers of food and flowers balanced on their heads.

Bali, being a tropical paradise, is both hot and humid. However, the climate provides a wide range of refreshing fruits, and juices or purées of lychee, sirsop, mango, and papaya were the main things I consumed during the day. In the cooler evenings, I enjoyed the local cuisine. In Ubud, my favorite restaurant was Café Wayan, which winds down a hillside, with tables perched on either side of a candle-lit, stone path. You can hear the gecko lizards singing their names and the rustling of the palms and hibiscus trees, and feel the cool evening breeze. The excellent food almost didn’t need to be as good as it was, the place was so beautiful.

Among the many memories I have of Bali is the sight of the soup vendors. The vendors would walk along the dusty roads, pushing modest, two-wheeled carts made of wood or aluminum, with a little brazier burning beneath a pot of soup, an awning providing a little shade, and little bells announcing their approach. At the sound of the bell, people emerged from homes or shops carrying large bowls. The soup vendor would put noodles in the bowls, then ladle in the soup, allowing diners to add sliced eggs, chopped scallions, or other garnishes as desired. 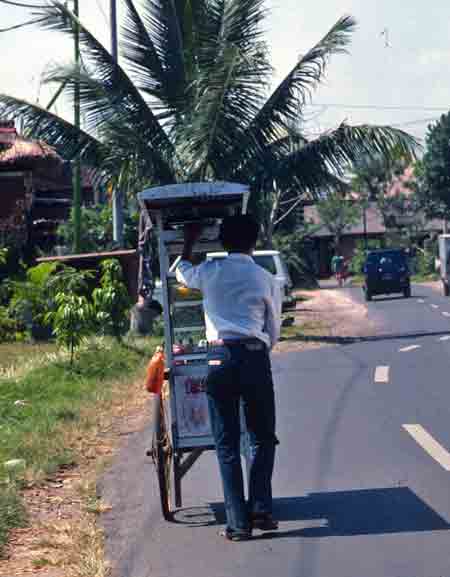 There are two words for soup in Indonesia—soto and sop. Sop is a thin, light soup served as part of a meal, while soto is a more substantial soup designed to stand alone. While vendors with pushcarts offer a wide range of food, almost all of the soup vendors I saw were offering Soto Ayam, spicy chicken soup.

Put the chicken, water, salt, black pepper, and one onion into a large saucepan or pot. Bring to a boil, then cover, reduce heat to low, and simmer for 1 hour. Remove the chicken from the broth and set aside to cool.

Heat the oil in a large saucepan. When it is hot, add the second onion, the garlic, ginger, and red pepper, and fry, stirring occasionally, until the onion is soft. Stir in the spices and cook for 1 minute. Pour over the broth and bring to a boil. Reduce heat to low and simmer for 15 minutes.

Remove skin and bones from the chicken and cut or tear the meat into bite-sized pieces. Put the chicken meat and cooked noodles into a large tureen and pour the soup over them. Add the juice of half a lime and stir. Taste for seasoning; add salt if necessary. Add the sliced scallions and eggs just before serving. Additional sliced scallions and lime wedges can be served along with the soup. Serves 6.

Notes: American chickens are fatter than their Balinese counterparts (unless you’re buying free-range birds), so cut off excess fatty skin and visible globs of fat before cooking. Also, basically any skinny noodles will work, so you don’t have to go in search of special noodles.