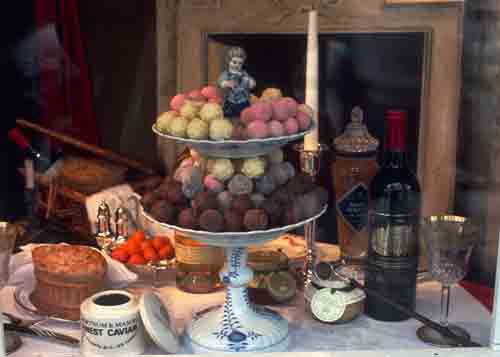 And what’s not to love? It’s an island, so fresh seafood is abundant and glorious. Even the French envy England’s rostbif. There is wonderful game and fabulous produce. And England has a glorious cheese heritage that dates back to the Roman Empire. To tell the truth, when I plan a trip to London, the food is one of the things I look forward to.

I’m not the first person to think this. Before scads of Americans were exposed to the tattered remains of British cuisine during World War II, England had an incredible international reputation as a food destination, and as a nation of foodies. If you want proof, just read Patrick O’Brian’s Aubrey-Maturin novels. They are primarily about the British Navy during the 1700s, but so much time is spent talking about food that a cookbook (Lobscouse & Spotted Dog) was published to recreate the dishes featured in the books, from goose and truffle pie to ship’s biscuit. (Interested in this book? Click here: Lobscouse and Spotted Dog: Which It’s a Gastronomic Companion to the Aubrey/Maturin Novels (Patrick O’Brian)

) England was wealthy, and ever since the ancient Greeks decided that people with money should eat better than everyone else, wealth has meant good food. And remember, the English didn’t spread the island’s imperial mantle to India because they liked bland, uninteresting food. They went for the spices.

England has long been on the cutting edge of culinary consumption. It was in England in 1700 that milk was first added to chocolate. Earlier still, it was England that initiated Europe’s love affair with coffee. Though coffee was being drunk in Muslim countries as early as the 15th century, it was not until a Jewish merchant from Turkey opened a coffee house in Oxford in 1650 that coffee culture really caught hold in Europe. France was next, then Vienna, and soon coffee houses were all over Europe. In England, coffee houses became the gathering places of intellectuals, politicians, and anyone else who liked to talk. One great chain of coffee houses, Kardomah, became a fixture in the high streets of towns throughout the UK. Welsh poet Dylan Thomas and his circle of friends frequented these shops with such regularity that they were known as “the Kardomah boys.” I can remember stopping at a Kardomah coffee house when I first visited London at age 14. They served coffee with amber sugar crystals, rather than plain, white sugar. I was enchanted. Today, though Starbucks has now displaced the majority of the old Kardomah cafés, there is still a lovely coffee culture in England.

England’s oldest restaurant, Rules, opened in 1798, and it’s a great place to indulge in classic English fare. Their menu offers a wide range of delights, including many varieties of game. Friends with whom I’ve dined assure me that everything is outstanding, and one friend still rhapsodizes about the smoked Scottish salmon. I believe them, but at Rules, I always order the same thing: the velvety, rich, flavorful Stilton soup as my starter and the splendid wild highland red deer for my main course. The preparation of the red deer varies each time I visit, but it is always superb. The history at Rules is almost as rich as the food. This is where Bertie (later King Edward VII) took Lilly Langtry while he was wooing her, and it has been the hangout of England’s literati for generations (Graham Greene loved the place). The interior boasts gorgeous wood paneling, murals, stained-glass skylights, hundreds of pictures, and mounted antlers and animal heads. I try to get to Rules every time I go to London.

Another favorite place to eat in London is Simpson’s-in-the Strand. As it approaches its 200th birthday, Simpson’s remains a bastion of all that is best in Britain’s dining traditions. The polished oak-paneled walls, high ornate plaster ceiling, and glowing chandeliers of the Grand Divan, Simpson’s main dining room, offer a wonderfully imposing setting for the flawless service and classic food. At Simpson’s, I’ve indulged in rich lobster soup, potato soup with truffle oil, and butternut squash soup with toasted pumpkin seeds. However, while I vary my starters here, I am as stuck on my main course as I am at Rules. Simpson’s roasts are almost legendary, and I invariably order the flavorful Scottish Angus beef, which is aged for 28 days and roasted to perfection. A carver rolls a silver-domed cart to your table and carves your beef tableside. It comes with buttery Savoy cabbage, roasted potatoes, Yorkshire pudding, and a rough-cut horseradish mixed with heavy cream that is unsurpassed anywhere.

Pubs are almost always reliable places to get food, as well as to sample England’s wide range of beverages. I don’t fancy beer, but I love the hard ciders that English pubs generally have on draft. Pub grub can range from simple sandwiches, leek pies, and beef roasts to complex, French-influenced dishes. For a hearty midday meal that is delicious, traditional, and relatively inexpensive, try a ploughman’s lunch. A ploughman’s lunch consists of a large chunk of whatever cheese is the local specialty, fresh bread with butter, a pickled onion, a bit of salad, and something known as Branston pickle, which is a bit like large chutney. This meal can generally be found in even the most remote and humble of pubs. Of course, if the sign outside a pub says “Chef and Brewer,” forget humble and expect to be impressed by the extensive menu.

Pubs predate restaurants by centuries, so the oldest pubs are older than the oldest restaurants. London has a number of delightful pubs that are 300 or more years old, but Ye Olde Cheshire Cheese is probably the most famous. Here, the history is as important as the food. Parked in the middle of Medieval London, in an area that was home or hangout for many of the giants of English literature, Ye Olde Cheshire Cheese hosted Dr. Samuel Johnson, who lived around the corner, and Charles Dickens, who describes it (though he doesn’t name it) in A Tale of Two Cities. The pub was rebuilt after the Great Fire in 1666. You can pop into the bar for a pint of their excellent private-label cider or beer, or you can eat in the ancient, creaky, wood-paneled dining room, where royals, diplomats, writers, and locals have mingled for centuries. The food can on occasion be overcooked, but most of the time it ranges from good to excellent—classic English fare such as duck and port pâté, roast beef, steak and kidney pie, bubble-and-squeak, and spotted dick (a classic steamed pudding dotted with currants).

Copyright Cynthia Clampitt ©2010
(This originally appeared in a different form in Hungry Magazine.)