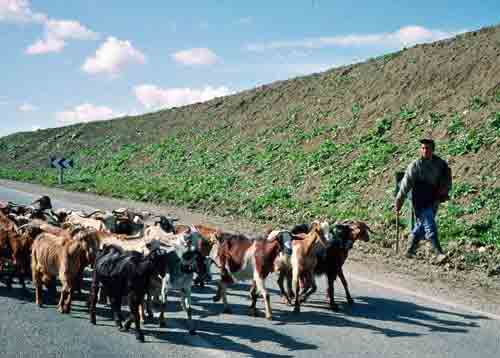 Goats have the right of way on rural roads in Morocco.

Goat is among the most commonly eaten meats in the world and was among the first animals to be domesticated, along with (though possibly predating) sheep and dogs. (New archaeological discoveries regularly cause “firsts” to leap frog back and forth over each other, with the pig possibly having been earlier, depending on which end of the date ranges domestication actually occurred, as well as on definitions of domestication. But suffice it to say, goats were among the first, going back to around 9000 BC.)

Because goats can survive in regions not suitable for cattle or sheep, they are particularly popular in mountainous, rocky, arid, torrid, and frigid regions. Bushes, trees, and desert scrub that other ruminants would not be able to eat or digest can quite comfortably sustain goats. However, their being able to eat anything can make goats a bane, as well as a blessing. When allowed to graze without supervision, they can destroy fields and woodland areas. However, goats help keep rangeland open for other animals, eating back encroaching brush. And because goats are small, they can easily be raised by families who simply do not have sufficient land or resources for cattle.

All goats belong to the genus Capra, and today’s domestic goats are descended from Capra aegagrus, the pasang. The fossil record seems to indicate that the drought associated with the last Ice Age favored goats, and it is believed that it was during this time that hunting and even semi-domestication of goats began. The first written records of domestication are Persian, so it seems likely that the pasang, also known as the Bezoar goat, is indigenous to the Near East. However, domesticated goats had been introduced into the Balkans by Neolithic times, and goats are among the domesticated animals that have been found at China’s best-known Neolithic site, Banpo. So goats were being traded or shared, often across vast distances, almost as soon as the earliest domesticators were aware of the creatures’ virtues.

In fact, some scholars feel that the ease with which goats can move from one environment to another had an important impact on human migration and trade patterns in prehistory, and even into ancient recorded history. Nomadic goatherds could move their flocks across any terrain with little risk of loss—and move they did. In addition to simply introducing goats over a wide area, it is thought by some that the arrival of these nomads encouraged people along their routes to attempt the domestication of other animals. Whether this is true or not, it is clear that the outcome of these peregrinations was at the very least the spreading of goats throughout Asia, Africa, and Europe.

The importance of goats in the Middle East is reflected in their frequent appearance in the Bible. From the time of the Patriarchs (about 2000 BC) right through the Old Testament, goats were frequently included among animals given as gifts or offerings. In Genesis, Rebekah prepares two young goats for Jacob to present to the aging Isaac, and in Leviticus, the term and concept of “scapegoat” is introduced, though at the time, it was a real goat, not a metaphor.

By the time of the Byzantine Empire, goat was one of three animals recognized as being “meat,” along with pigs and sheep. (Cattle were working animals.) The widespread popularity of goat in Europe and England can be seen in the etymology of the word butcher, which evolved from the Old French bouc, or he-goat. Originally, butchers only prepared goat meat. However, by the fourteenth or fifteenth century, Europe’s aristocracy began to favor what it considered to be more delicate or more wholesome meats, and goat meat began to decline in popularity among the class conscious. (This paralleled a decline in the consumption of swans, peacocks, seals, and other morsels once considered indispensable at royal feasts.) At a time when everyone was trying to find order in the universe and looking for social structure, even among the elements, meat as hearty as that of the goat was seen to be fitting fuel for those who labored, while chicken, partridges, and other fowl were associated with the air, and were therefore suited to the nourishment of the intellectuals. However, goat remained popular at all levels of society in more mountainous regions and in the Mediterranean countries—including the countries that eventually introduced goats to the New World.

Today, much of the world, including China, Great Britain, Europe, and North America, thinks of goats primarily in terms of milk and cheese production. In addition, Angora and Cashmere goats are prized for their hair. But in many places, goat meat is the only option for mealtime. I have met people from northern India who said that they never had lamb or chicken growing up; goats flourished in the dry, mountainous region, and they were what everyone ate.

The arid regions of Central Mexico also rely on goat, and traveling in this region, one sees not only goats, but also myriad small roadside restaurants with large signs advertising Cabrito Barbacoa or Cabrito Asado. In much of Africa and Asia, a large goat herd represents wealth and security. This small, easily raised ruminant is popular in many places, and goat is still among the most commonly eaten meats in the world, with 75 percent of all the world’s goats in developing regions.