In a book I’m reading, I had just encountered with considerable delight a statement that the word “sterling” came from “Easterlings,” a name often given to the upstanding merchants of the Hanseatic League. I was ready to write that up as a Fun Fact, but years of working in publishing made me feel odd about publishing anything without checking another source. Hmm. Webster’s Dictionary said the word probably came from the Old English steorling, from steorra, or star. Okay, so the dictionary says “probably.” Time for a third source.

So on to Britannica. It said “One theory” is that it comes from the silver coins made by the Germanic Easterlings–so referring to their silver rather than their sterling characters. Then it adds “A more plausible derivation” is the steorling mentioned by Webster’s, meaning “coin with a star.”

So, in other words, there is no absolutely certain explanation–the word arose a thousand years ago, and it’s hard to track precisely all influences and language changes going back that far.

One thing I did discover while looking into this, however, is why British money was originally divided up the way it was–and why it was (and is) called a pound. In Anglo-Saxon times, one pound of silver would be coined into 240 pennies. These pennies were 925 parts silver to 75 parts copper (and one still sees 925 stamped on sterling silver). Each silver coin bore a star, and so it was called a steorling, or “coin with a star.” But that means that, at one time, a pound sterling in Britain really was a pound of sterling.

And what does this have to do with food, you might be wondering. Well, the Hanseatic League made their wealth and gained their power from controlling the salt trade for a couple of centuries–back when salt was the only reliable way to preserve food for most people. So almost no story is more than a step or two away from food.

I’ve written about The Spice House before (you can read the article here, if you’re not familiar with this great place). But now these excellent and enthusiastically uncompromising folks have started posting videos on YouTube. So far, they’ve just got a few, but you can learn more about the spices they offer, how they make their blends, and how to cook with some of the spices they carry. Don’t think Food Network–it’s not that glitzy. Think of it more as a good friend sharing information and giving tips.

The videos are all posted under ChicagoSpiceBoss. I thought the one on Kosher salt was a good introduction to Tom Erd, the Spice Boss, and then there’s one on their Back-of-the-Yards Garlic Pepper Butcher’s Rub, which is one of my favorite things they sell. Nice to have a little more insight into these premier purveyors of outstanding spices and herbs.

There are a couple others now, and there will be more. These always make me want to order more goodies from The Spice House. (Have to try their porcini salt! Plus I’m out of the Back-of-the-Yards rum. Time for a visit.)

Salt of the Earth 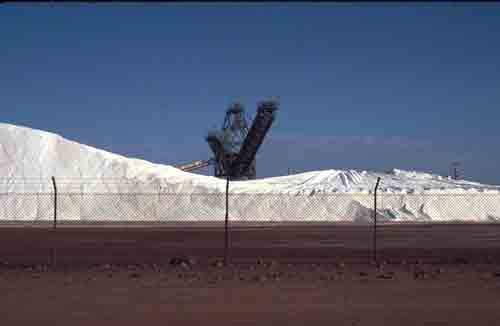 Though historically, pepper may have been viewed as the spice of life, salt was life itself. Cassiodorus, a Goth administrator in the 5th century AD, wrote, “It may be that some seek not gold, but there lives not a man who does not need salt.” Every cell and all the fluids of the body contain salt. All neural activity requires sodium, and salt is essential to muscle movement. In arid lands, salt was and is as important as water for survival. (In fact, one is in greater danger of dehydration for want of salt than for want of water.) And animals are as dependent on salt as humans.

Anything that means life usually means wealth, too, and salt has been used as money, and still is in some parts of Africa. As often as it has meant wealth, it has also meant power, and rulers from the ancient Egyptians down to present-day despots have used the control of salt as a way to control people. And as is the case with other things of great value, from cattle to gold, salt has entered our language, our literature, our metaphors. END_OF_DOCUMENT_TOKEN_TO_BE_REPLACED