The following recipe is for a dish that is both vibrantly colorful and wonderfully flavorful. Don’t be intimidated by the four jalapeño peppers — if you remove the seeds and white membrane from inside the peppers, they hardly have any heat, especially when cooked a long time, so it’s a very mild dish. If you want it to be hot, however, leave the seeds in one or more of the jalapeños, or add some crushed red pepper or a dash of cayenne at the end of the cooking time.

Guacamole with tortilla chips would make a nice accompaniment to this dish. 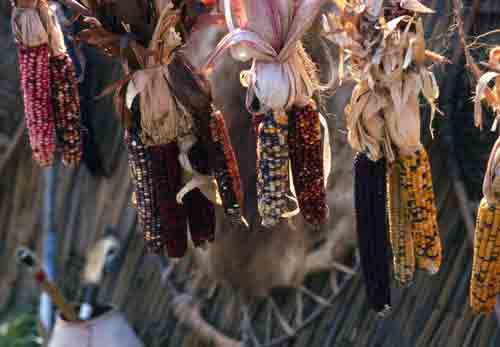 One thing of which we are all relatively certain here in the U.S. is that European settlers learned about corn from American Indians. Right? Well, not really. What they learned about from the indigenous peoples of the New World was maize, not corn. Sound like double talk? Well, as it turns out, the word corn may not mean what you think it does, at least not if you’re an American. The term corn actually means the most important cereal crop of a region. Hence, wheat was traditionally the corn of England, oats were the corn of Ireland and Scotland, rye was the corn of northern Germany, and in South Africa, the grain known as Bantu corn is millet. The term can also mean small, hard seed, which is why the seed from barley is often called barleycorn. When settlers reached the New World, they called the grain grown most commonly by the Native Americans “Indian corn.” Which explains why, even though no one in Europe had seen maize before they reached the Americas, you see references to corn in older literature. Only in the United States is the word corn used to denote maize alone.

(A little etymological aside here: The corn that means grain comes from Old Norse, korn, which means “grain.” The hard bump that grows on some toes, though it may feel like a hard seed, actually gets its name from the Middle English/Middle French corne, which means “horn.” So the words are unrelated.)

Zea mays, or maize, is the only cereal grain indigenous to the New World. It appears to have been domesticated around 6600 BC in the area of Mexico known today as Oaxaca, where, scholars conjecture, it was intentionally bred from a wild grass known as teosinte. (The conjecture is that it was intentionally bred, not that it came from teosinte.) Teosinte still grows in some parts of Mexico, Guatemala, and Honduras. Interestingly, while teosinte does just fine on its own, maize doesn’t. Maize is, in fact, the only cereal grain that cannot disperse its seeds without human intervention. It is so domesticated it can’t get along without us. END_OF_DOCUMENT_TOKEN_TO_BE_REPLACED

I’ve done histories on cheese and eggs, so I thought it might be time for a recipe that combined the two —cheese soufflé. The soufflé is pretty much the pinnacle of egg-dom, the coolest possible thing to do with these versatile little protein parcels. And (here’s the surprise) it’s actually pretty easy to make a soufflé. In fact, this is an almost fool-proof recipe. Soufflés are fun, yummy, and a relatively easy way to impress the heck out of people. (The instructions may look ponderous, but don’t let that put you off—a lot of it is just technique, to help ensure your success.)

For soufflé making, in addition to the usual pots, cups, and measuring spoons, you must have a metal or ceramic bowl (never plastic), a rubber spatula, and a whisk. An electric mixer is pretty much a requirement, as well (I’ve actually beaten egg whites by hand before—so I know it works, but I also know it’s a daunting amount of work). A soufflé dish is nice, but not required; you just need an oven-proof dish of some sort, 1 quart capacity for this recipe, or double the recipe, if all you have is a 2-quart baking dish.