Have Apron, Will Prosper

(This article appeared in the November 2000 issue of North Shore Magazine. It was the last piece I’d do for Tom, my first editor at the magazine. By the January 2001 issue, there’d be a new editor—fortunately, one with whom I enjoyed working for as long as she was at the magazine. However, Tom was the editor who accepted my first piece at North Shore, so I was sorry to see him go. As for the story, I loved interviewing these women—and I still smile when I see their products in stores.) 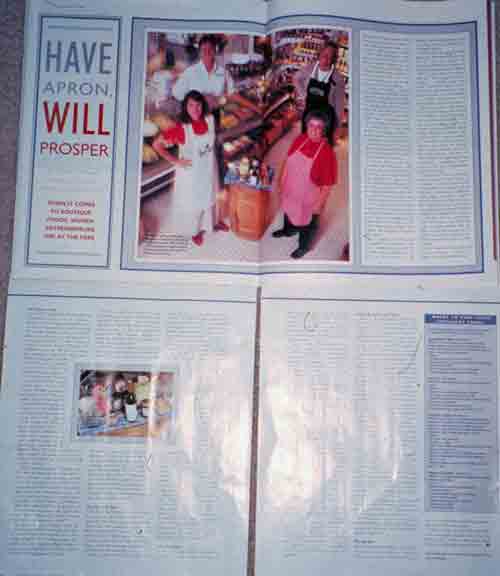 Though it was early, the big tent at the Long Grove festival was already bustling. However, it was not yet difficult to reach the tables where the free samples were being handed out. At the first booth, I savored bits of chicken cooked in a variety of tasty sauces. The garlic and herb was my favorite. I smiled at a young woman who was busy with toothpicks, and said, “Really delicious.” Then I moved on.

At the next booth, another woman was handing out samples of outrageously rich cake. I smiled again, then moved farther down the same booth, where I was offered a sliver of herb-basted turkey. Yum. I absently turned over the package, and noticed that it was made locally. I looked up at the cheerful woman behind the counter and said, “This is your company, isn’t it?” She replied that it was, then launched into her favorite stories about her business and her customers. I got her card, then headed back to the first booth.

The jar told me that the sauces were made in Wheeling. Now, I keep sufficiently abreast of food trends to have heard that women were having an impact on the specialty food business, but for some reason, I had never thought of it as happening here, in Chicago’s suburbs. I thought it was in New York, or maybe Los Angeles, but Wheeling? Yes, the young woman behind the counter was the business’s founder and owner. I got her business card, too. END_OF_DOCUMENT_TOKEN_TO_BE_REPLACED

A Roe By Any Other Name

(This piece appeared in the January 2002 issue of North Shore Magazine. Collins Caviar is still going strong, and if you want to order some of their yummy roe, you can find them at http://www.collinscaviar.com/. Binny’s, Schaefer’s, and Patrick Chabert are also still in business, though Schaefer’s has new owners.) 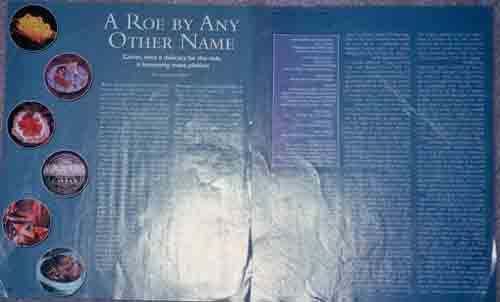 When Shakespeare’s Hamlet said of a play he’d seen, “‘twas caviar to the general,” caviar was barely known in England. Familiar only to gourmets and royalty, it was a fitting metaphor for something the masses could not readily appreciate. Some things have changed during the 400 years since the bard penned those words. Today, refrigeration permits the shipping of this Epicurean delight far from the seas where the roe are harvested. It also permits the use of less salt in the processing. But caviar is still a rare treat that speaks to us, as it did to Shakespeare’s melancholy prince, of sophistication, good living, and scarcity.

Interestingly, though caviar is now one of the costliest foods in the world, there was a time that it was so inexpensive that saloons in the United States offered it free. In the late 1800s, the salty delicacy was placed on lunch counters to encourage customers to order another five-cent beer. Rivers around the world teemed with sturgeon. It was so plentiful in the Hudson that sturgeon was called “Albany beef.” At the beginning of the 20th century, the U.S. still had a thriving caviar industry. But today, the sturgeon, which gives the best (and, according to many sources, only real) caviar, is becoming increasingly rare. Overfishing and pollution both threaten the sturgeon, so populations have dwindled. (Fortunately, Russian scientists have now discovered how to remove the eggs without killing the sturgeon, which can be released after harvesting.) END_OF_DOCUMENT_TOKEN_TO_BE_REPLACED

The Glories of The Spice House

(This article appeared in the December 2002 issue of North Shore Magazine. Julia Child, mentioned in the story, was still alive and still ordering from The Spice House. The title I gave the story was “Always in Good Taste,” but it was run with the title “With a Hint of Spice.” For those of you who may not be in the Chicagoland area but who would like to take advantage of the glorious offerings of The Spice House, you can access their catalog at http://www.thespicehouse.com.) 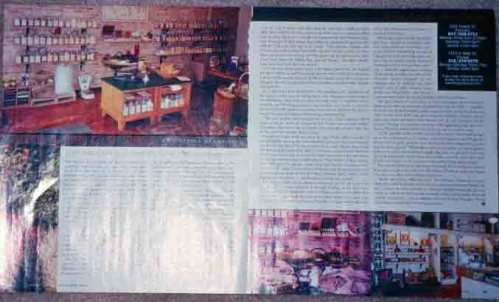 The heady fragrance of black pepper and cinnamon began to tease my senses while I was still a block from the store. As I entered the attractive Evanston shop, a rich, almost intoxicating blend of aromas enveloped me, drawing me into the warm, woody interior, towards the walls and shelves of jars filled with tantalizing delights from the four corners of the earth. Before me was an astonishing array of lovingly prepared, freshly ground herbs and spices—from ajowan seed to za’atar, and everything in between. No wonder Julia Child loves this place.

The Spice House, owned by Tom and Patty Erd, is a second-generation, family-run business that has as its chief goal offering simply the best herbs and spices available. Fortunately, you don’t have to be Julia Child to have access to this level of quality. While numerous top chefs and food experts do shop there, the doors (and web site) of the Spice House are open to all. END_OF_DOCUMENT_TOKEN_TO_BE_REPLACED

Tagged as spices, The Spice House

Living By the Sword

(Okay—this one isn’t about food. But I loved meeting these guys and writing the story.) 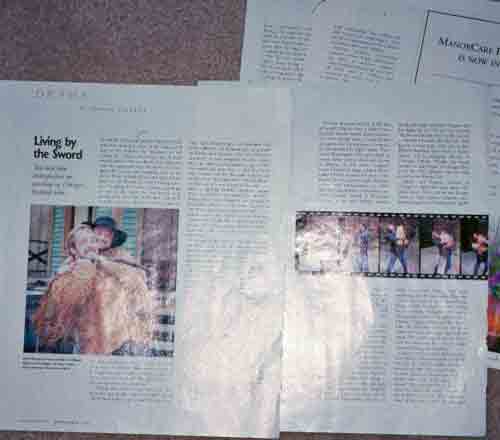 A look of rage passed across the otherwise handsome face of the dark-haired man as he grabbed the shirt front of the young, fair-haired man facing him. A loud thwack made it obvious that his fist connected with his opponent’s face. He showered blows upon the young man, dropping him to his knees. Then he kicked him; kicked him again. It was all over in a few bruising minutes.

Brushing his hands together, signifying an end to the fight, the dark-haired man moved away from the motionless, crumpled body. He turned to face the crowd of onlookers and noted cheerfully, “I could tell from your reactions that the fight was convincing. Let’s go through it again, in slow motion, to show you how it’s done.” The fair-haired victim sprang to his feet, grinning.

Though the audience was shaken, it was obviously just another day’s work for Richard Gilbert and David Gregory. This dynamic duo are partners in R&D Choreography, theatrical “violence designers.” They are fight choreographers, stage combat instructors, and stunt men—and they know how to make you feel their pain. END_OF_DOCUMENT_TOKEN_TO_BE_REPLACED

(This was the cover story for the Jan/Feb 2001 issue of North Shore Magazine. The title under which the story ran was “What do You Think This is, A Restaurant?”—but that seemed a bit long for a blog title. Working on this story, I loved getting to see the interaction between the top chefs and their children.) 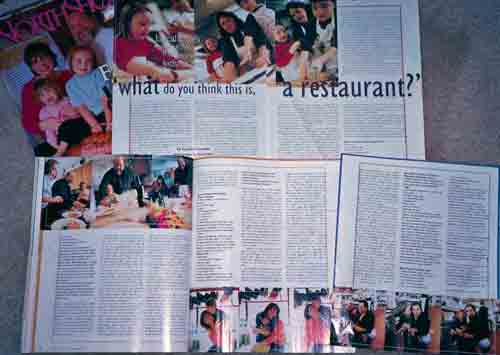 Standing tiptoe on an old, yellow, wooden kitchen chair, Natalie Cleland pours yeast into a large bowl containing flour, which her brother, Desmond, standing beside her on an identical chair, has just measured. The two children wriggle and jostle each other in their excitement. With help from mom, chef Peggy Ryan, Natalie, who is three, adds olive oil to the mixture. It’s almost dinner time, and this happy trio is making pizza.

Five-year-old Desmond (five-and-a-half, he corrects) wants to push the “on” button as soon as mom has loaded the Cuisinart with chunks of Parmesan cheese. When asked if he likes to cook, he responds swiftly and emphatically, “yes.” In fact, he wants to become a chef. Natalie simply wants to push the “off” button. Peggy shepherds the two youngsters through the process, mists their hands with vegetable oil so the dough won’t stick, turns on the oven, prepares the pizza stone.

Peggy, who recently sold her successful Evanston restaurant, Va Pensiero, and has now turned her talents to teaching, is obviously pleased with the children’s enthusiasm. Food is important to her. It’s important to her husband, Roger Cleland, as well, though he works on the business side of the restaurant world.
Of course, it comes as no surprise that a successful chef would be interested in food. But how do chefs get their children interested? How do they integrate food as work with food as part of family life? END_OF_DOCUMENT_TOKEN_TO_BE_REPLACED

The Joy of Michael’s Cooking

(This article, which first appeared in North Shore Magazine, won 2nd place in the International Food, Wine & Travel Writers Association Awards competition. Since this article came out, Chef Pierre Pollin retired from restaurant work and now teaches in the Culinary Arts program at Kendall College. Chef Michael Maddox and his wife, Susan, bought Pollin’s share in the restaurant, and Le Titi is still a thriving operation, with wonderfully expanded offerings that now include a wide range of classes, including summer cooking camps for kids. For those who are interested, by the way, Le Titi is French for scamp or rascal.) 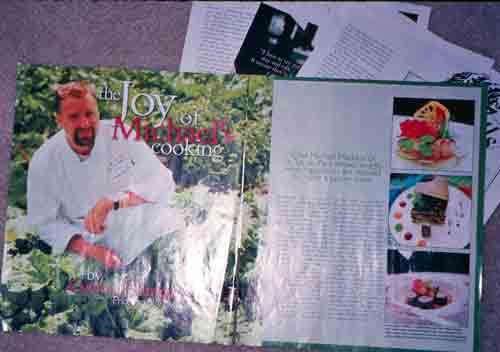 Luxuriant plants dance in the stream coming from the hose trained on them. The tall, sandy-haired farmer’s son who is doing the watering strides gently but confidently among the tidy rows of healthy herbs, vegetables, fruits, and flowers. However, this farmer’s son is not attired in overalls. Instead, he sports a spotless, white jacket with a line of embroidery that identifies him as Michael Maddox, chef/partner of Le Titi de Paris, the celebrated French restaurant in Arlington Heights.

“I think people have more respect for the ingredients if they know where they came from,” Maddox explains. Directing water to the sorrel, he notes that it is at its peak. For the sautéed Rhode Island skate wing with sorrel and sun dried tomato infusion currently on the menu, the fish cook must cut the herb daily. “All the cooks are involved in the garden at some level,” Maddox explains. He thinks they should know how to raise what they use and sees education as an important part of what he does. END_OF_DOCUMENT_TOKEN_TO_BE_REPLACED 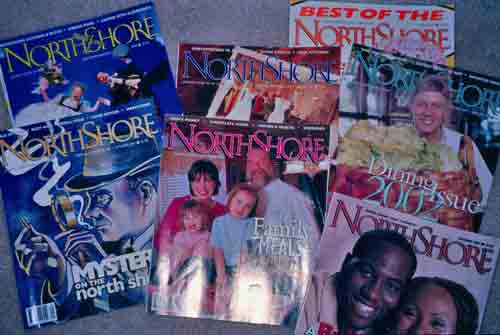 One of my favorite situations (and probably a favorite for any working writer) is establishing a relationship with an editor and then writing regularly for that individual over a long period of time. I’ve enjoyed this type of working relationship with a number of editors and magazines over the years, but editors move, budgets get slashed, and magazines close or are sold, and sometimes a combination of these things occurs, and “poof,” it’s time to find a new magazine.

For four years (mid-2000 to mid-2004), I wrote for North Shore Magazine. I was freelancing, but hardly a month passed that I didn’t have a feature story in the magazine, and sometimes two. This stretched out across the tenure of two different editors. Then a new editor came in and concurrently budgets were slashed, and freelancers were a thing of the past (as already harried editors took on the job of writing, too). However, my articles were still on their website, so I had a place to send people to show them what I could do.

Recently, North Shore Magazine was sold. The new owners have a completely different vision for the magazine, and the overhaul was so extensive, they even got rid of the archives. So all my stores vanished. So I thought that, for the next few weeks, I would simply post a few of my favorite stories from this era here, so that the links on my web site (worldplate.com)—the ones designed to show editors and other potential employers what I can do—have something to connect to once again, since those archives are gone.

So, starting tomorrow, you’ll be able to read a few of the magazine articles that I think turned out pretty well.