Already Planning to Go Back

While I’ve focused almost entirely on the fun stuff, our days were largely spent studying at the famous journalism school, the Poynter Institute. We heard programs on everything from topic trends to useful software. This cartoon hung on the wall at Poynter reminded us that, while writing is a serious business, it’s good to see the lighter side of it.

Definitely worthwhile, but it meant we saw a lot less than if we were on vacation.

The conference kept me too busy to get to the Sunken Gardens, which were the first thing suggested by just about everyone I asked for recommendations. I also missed the Dali Museum, which got rave reviews. I never got to the beach, and I learned too late that there is still a place in St. Pete that serves smoked mullet.

Plus there are all the other delights of the area. I’m determined to dine someday at Bern’s Steak House in Tampa. I want a full meal, and not just a snack, at Columbia. Plus I want to visit again some of the places from long ago—the Ringling Estate, Tarpon Springs, Fort De Soto.

And I’m certain that when I check out sites such as Visit St. Petersburg-Clearwater and Visit Tampa Bay, I’ll find even more things to lure me back to the area.

So farewell for now, Tampa Bay. I’ll definitely be looking for an opportunity to return.

Tampa has in the last few years experienced an explosion of craft breweries, which seems to be happening in a lot of places, largely as a result of so many folks losing high-paying jobs and figuring that, if they can’t make a lot of money, they might as well have a lot of fun doing something they love. I’m not a beer drinker, but I know enough people who are that I figured this was worth passing along.

Along with the increase in the number of new beers, there have been increases in other areas of consumption. While in Florida, I tasted a dangerously tasty cocktail made with coconut rum from Wicked Dolphin Artisan Rum Distillers, from Cape Coral, Florida. (Here’s the recipe for their Wicked Punch, if you’re interested.)

One of the more remarkable places we visited was the Epicurean, a new food-focused hotel created by the owners of Bern’s Steak House. The hotel features a cooking school, organic greens growing on the walls in the main restaurant, and gourmet amenities in the guest rooms, from butcher blocks and wine coolers to delightful goodies in the stocked fridge. And it’s across the street from the steak house and its remarkable wine collection, so one need not drive home if one samples a bit too much of that collection.

A lot of the new restaurants in the area are focusing on artisanal foods and beverages. Haven was remarkable for having the fabulous, climate-controlled cheese locker shown below, which both displays and protects their remarkable, international collection of cheeses. 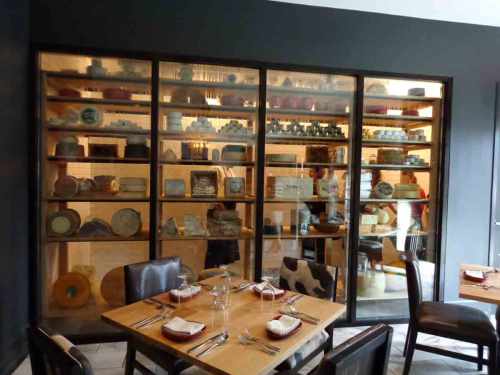 Ulele (pronounced You-lay-lee; it’s the name of a legendary Native American princess) has the advantage of lovely views across the Hillsborough River, great gardens, and a fabulous building: the repurposed 1906 Tampa Water Works Building. Ulele focuses on the abundance of Florida, particularly indigenous ingredients. Everything we ate there was just crazy good, but the standouts for me were the alligator hush puppies, spicy lobster cakes, garlic-laden charbroiled oysters, Ulele salad (greens, cheese, beans, roasted peppers, onions, and a balsamic vinaigrette) and the crab mac and cheese. Everything was good, but those were the “wows” for me. The house-made ice cream was pretty special, too.

So Tampa is definitely a good choice for people who like to eat.