I do a lot of public speaking, much of it on travel, some of it on food history. A currently very popular presentation I give is on the history and impact of rum, which arose in the Caribbean in the 1600s and spread around the world. If you want a little more background on its impact (like the American Revolution), you can check out my earlier post, Yo Ho Ho and a Bottle of Rum . One expects rum in a fair number of places–the Caribbean, Australia, South America, and Hawaii, for example. But one does not expect to find rum being produced in Illinois, which has a long history of corn whiskey but no history at all of rum making. It was a most unexpected discovery–and was, quite obviously, something I had to check out.

Tailwinds Distillery in Plainfield is a top-notch distillery of exceptionally fine rum. When I met Toby Beall, who is the founder and head distiller for Tailwinds, I learned that his interest in rum, like mine, is anchored in history. He is a descendant of some of the hundred-plus early rum distillers of colonial New England.

Toby took me on a bit of a tour of the facility and answered a few questions about his rum. The molasses comes from Louisiana, but he pays extra to have them stop the sugar separation earlier in the process, which makes it possible to create a finer rum. His white rum, which is lovely and fragrant, is an award winner. His amber rum, which is aged for 8 months in rye whiskey barrels, has more body and is very smooth. Whole Foods carries these rums in the Chicagoland area, but Toby hopes Tailwinds will soon be able to expand their reach. (And their facility has plenty of room to grow.)

Toby and his brother/partner, Jamie, are both pilots–hence the company’s name, Tailwinds. Traveling in the Caribbean, and sampling the greater variety and higher quality of rums there, is what switched Toby from looking for the usual stuff at liquor stores to wanting to produce a really high-end rum back home.

The handsome, copper and brass still that lets them make the magic happen was built in Louisville, KY (another place that knows something about distilling fine spirits). In addition to rum, Toby also makes a very clean-tasting agave liquor–just to keep things interesting. But rum is still the main focus.

Now that things are moving along at a nice pace, Toby feels they can start putting rum up for longer aging. (Since the company is only one year old, they haven’t had a chance yet to do anything with a huge amount of age.) I think this is a company to watch–but even if you don’t want to track their progress, you might want to pop into Whole Foods (if you’re in the Chicagoland area) and check out this new, Midwestern entry in the rum race. I don’t think you’ll be disappointed.

The still at Tailwinds.

This Chick Can Help With Your Chickens 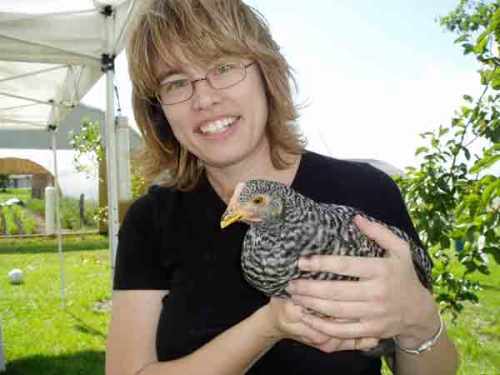 As a food writer who researches the sources of what we eat, I frequently encounter both purveyors and buyers who bemoan the disconnect between source and consumer that is so common today. Not only are we no longer a rural society, we hardly even know what rural means anymore. Plus, with food brought in from Chile or China as often as from a nearby farm, that disconnect with the food source grows.

There are, of course, many who are fighting this trend–and, in fact, fighting this trend is becoming a trend itself. Farmers offer tours of their facilities. Community Supported Agriculture offers an opportunity for city slickers to dig in the dirt. At farmers’ markets, people can actually talk to the people who grew the food they’re about to buy. And now, people are beginning to consider ways they can become part of the supply chain.

Urban farmers are digging up small backyards to create lush vegetable gardens. Rooftops sprout greenery and greenhouses. And now, in some places, cities are beginning to allow people to have a few chickens in the back yard. Nice to think of actually having a really fresh egg from time to time. And, unlike a dog, you don’t have to walk a chicken. But what do you have to do, and where do you go, if you do want to learn more about raising chickens?

Of course, researching it on your own is a possibility. The information is out there. But if you’re pressed for time and want to take advantage of the accumulated expertise of someone who has been thinking about all these things for many years, you could hire someone like Jennifer Murtoff. Jennifer is an Urban Chicken Consultant. Based in the metro-Chicago area, she has a wide range of neighborhoods and cityscapes that have benefited from her expertise. From presentations to groups to private guidance in how to establish your own coop full of chicks, Jennifer makes it her business to share the ins and outs of raising, feeding, and benefiting from your own hens.

If you’d like to learn more about Jennifer’s business, along with a wealth of information and tips for those already involved in raising chickens, you can check out her blog, Home To Roost.

It’s fun and encouraging to see people taking an interest in learning about food production. As Jennifer notes, a few chickens in the backyard won’t be enough to keep you from ever going to the store for eggs again, but there’s something about having your own eggs from your own hens that makes those eggs just a little more special.

Oh — and if chickens are just a bit too ambitious for you, ask Jennifer about quail. They can make a nice addition to the family, as well.