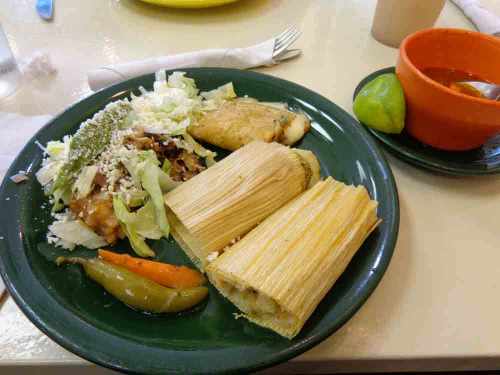 I just finished working on a book about the history of corn. I’m also working again with Maria Baez Kijac, with whom I worked on the award-winning cookbook The South American Table. So a friend figured a restaurant that focused on Latin American corn dishes would be of interest. She was right.

Momcorn, at 5101 Washington St #2 in Gurnee, IL, is not hugely convenient for me, but it proved to be well worth the drive. Asked about the name, owner Sergio Rivera said he figured everyone knew popcorn, so momcorn needed to be introduced to the world.

The menu was a delight. For drinks, the corn-based choices were atole and chicha morada (they have several non-corn drinks, including soft drinks, tea, and coffee, but I was there for the corn). I’ve had atole a number of times in Mexico, so I went for the chicha. It was tasty, sweet-tart, tinged with cinnamon, and (as the name suggests) deep purple. Sergio brought over an ear of the dark purple corn used in making the drink, to show that the color was natural. 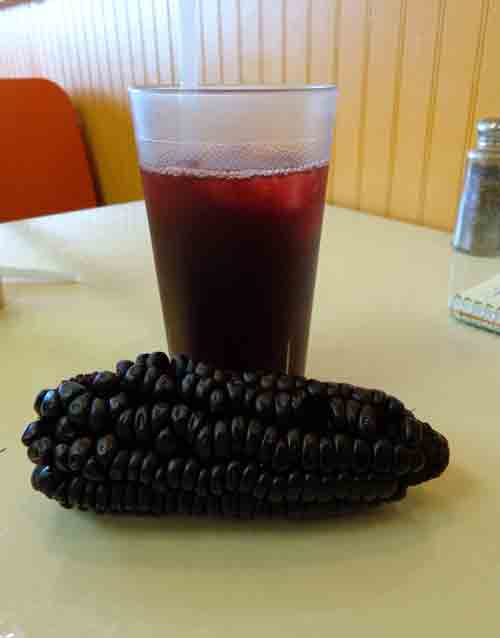 I ordered a cup of pozole, which was spicy (but not brutally spicy) and flavorful.

Sergio recommended the quesadilla, which was outstanding — made with cheese, epazote, and serrano chile.

Next we had sopes topped with meat and avocado and two kinds of tamales (rajas and chicken with green chile).

We finished the meal with a warm, sweet empanada filled with guava paste and cheese.

Sergio related that the ingredients are locally sourced and all natural. Nothing is frozen, and everything is made from scratch. To underscore the authenticity of the dishes, he related that some customers get tears in their eyes when they eat some of the specialties he produces. They said his food was just like their grandmother’s. I’ve had a fair bit of experience with Latin American food, both from my travels and from working with Maria on her cookbooks, so I did have a pretty good idea that these were on the exceptional side of authentic.

While there is a menu, Sergio noted that if there’s something you love from Latin America and it involves corn, ask. They might be able to make it for you.

This might not make anyone want to travel to Gurnee, but the restaurant is right behind Great America and not far from I94. So if you happen to be heading up that way for other entertainments, you might want to add this to the list of places worth visiting.

To see their menu, you can visit their site. http://www.momcorn.com/