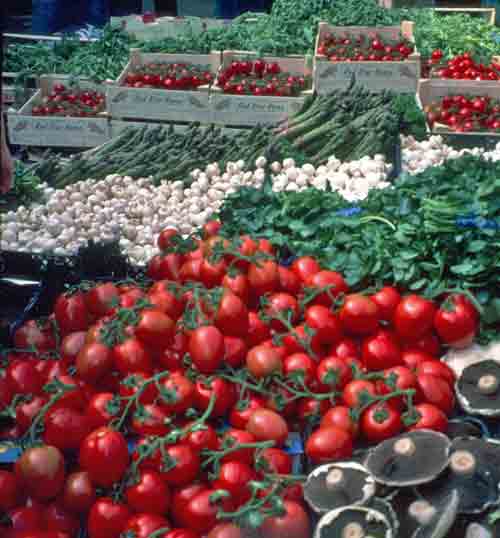 England’s food has roots that stretch back for millennia. As invading Romans marched toward London in AD 43, they found a thriving, well-established food market on the southern side of the Thames. It was called the Southwark Fair Market, and it became even more successful after the Romans built the first bridge across the river. By 1014, merchants from all over Europe were traveling to this market to trade. The market was acknowledged as an institution by 1276, and in 1754, the market at Southwark was officially recognized by Act of Parliament, with its 4.5 acres in Central London permanently safeguarded. Still vividly active today, the Borough Market in Southwark is a bustling culinary paradise packed with fabulous seafood, game, fruit, veggies, honey, jams, herbs, and myriad other delights. The crowds include not only knowledgeable shoppers stocking their private larders, but also restaurateurs in search of the freshest and best ingredients. And noshing at the 2,000-year-old marketplace can extend beyond the odd free sample, as many vendors sell snacks and even lunches, so you don’t have to choose between shopping and eating. END_OF_DOCUMENT_TOKEN_TO_BE_REPLACED

And what’s not to love? It’s an island, so fresh seafood is abundant and glorious. Even the French envy England’s rostbif. There is wonderful game and fabulous produce. And England has a glorious cheese heritage that dates back to the Roman Empire. To tell the truth, when I plan a trip to London, the food is one of the things I look forward to. END_OF_DOCUMENT_TOKEN_TO_BE_REPLACED

Random Act of Culture in Philly

Okay—this is not about food. But it is about culture, and about a town I don’t live in but have visited. So it kind of fits the theme—and it definitely fits the approaching season. This is a “Random Act of Culture” staged by the Philadelphia Opera Company at the Macy’s in Philly (which, surprisingly, houses one of the largest pipe organs in the world—who knew).

Tagines in the Meknes Market, Morocco

Tagines are the cooking vessels of choice in Morocco. The word tagine has also come to refer to anything cooked in a tagine, so one sees listed on menus “chicken tagine with preserved lemon” or “lamb tagine with prunes” (both favorites).

Different regions in Morocco have different styles of tagines, but all tagines produce the kind of wonderfully blended flavors one gets from moist, low-heat cooking. The image above is of a pile tagines in a market in Morocco. These are all cooking tagines. There are fancier serving tagines, which are fancier but not suited to cooking. I learned how to cook in a tagine while in Morocco, but really, the only secrets are to make sure you season your tagine (which involves soaking, oiling, and heating), use a heat defuser between the tagine and your stove burner, and pick a recipe that sounds good. As an fyi, the hole in the top of the tagine is a spoon rest—stick the handle of the spoon in the hole, and it’s just deep enough to keep the spoon from falling out. Given the number of places I saw tagines simmering away where there was no cooking surface on which to lay a spoon, this is tremendously practical.

I mention all this because I discovered a great place to buy tagines. Granted, they might have been cheaper while I was in Morocco, but they’re heavy, bulky, and can break, so trying to carry one home is just not one of the things I was willing to consider. But I still wanted one—and I was fortunate enough to discover tagines.com. They are lovely to do business with, ship the tagine carefully packaged so it arrives in one piece, and even offer a couple of recipes. If you don’t feel like making your own preserved lemons, or didn’t bring two pounds of ras el hanout home from a trip, they offer these key ingredients on the site as well. The image below is of my tagine, the standard-size Rifi cooking tagine. Lots of fun, if you want to try cooking Moroccan food the way Moroccans do. 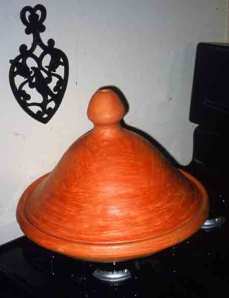