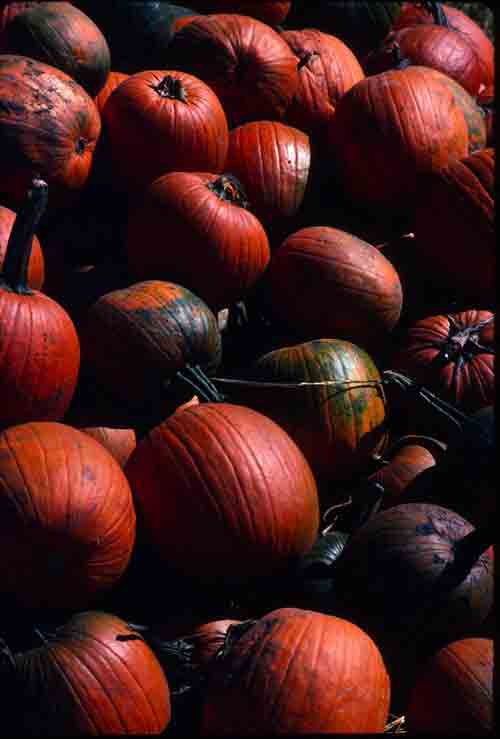 Autumn and winter are a time for hearty vegetables, mostly roots and tubers. It is also a great time for winter squash and pumpkins. Squash and pumpkin are among the myriad delightful foods indigenous to the Americas that became part of the Columbian Exchange.

The word “squash” comes from the Natick and Narraganset Indian word askútasquash,, which meant “the green things that may be eaten raw.” I’m just betting they were speaking of summer squash. The word pumpkin comes from pumpion, a corruption of the French pompon, or melon. Well, the pumpkin is a fruit and a distant relative of the melon, but it isn’t a melon, it’s a squash. While the difference between most pumpkins and most winter squashes seems pretty obvious to most of us, the debate still goes on in some quarters as to what is a gourd, and is a gourd a squash, and which squashes are actually pumpkins—because they’re all related, and in some differences, the lines blur. Pumpkins are even sometimes described as gourd-like squashes. But for most common usage, and for what is most generally available in stores and farmers’ markets, we know what the difference is. (That said, for many applications, winter squash and pumpkin are fairly interchangeable.) END_OF_DOCUMENT_TOKEN_TO_BE_REPLACED

I don’t actually like beer—with the exception of a nice peach lambic or similarly unbeerlike brew. I’m a wine or hard cider girl. However, from the first time he tasted beer, my brother thought it was the best thing on the planet. He has grown up to be a widely recognized connoisseur of beer, and he writes a great beer blog. So if you are one of the many people who do love beer, you might enjoy following my brother, Darch, on his explorations in the world of hops and brews at Beer Lieder. He doesn’t post often, but when he does, it’s wonderfully in depth. It even makes me wish I liked beer.

Salt of the Earth

Though historically, pepper may have been viewed as the spice of life, salt was life itself. Cassiodorus, a Goth administrator in the 5th century AD, wrote, “It may be that some seek not gold, but there lives not a man who does not need salt.” Every cell and all the fluids of the body contain salt. All neural activity requires sodium, and salt is essential to muscle movement. In arid lands, salt was and is as important as water for survival. (In fact, one is in greater danger of dehydration for want of salt than for want of water.) And animals are as dependent on salt as humans.

Anything that means life usually means wealth, too, and salt has been used as money, and still is in some parts of Africa. As often as it has meant wealth, it has also meant power, and rulers from the ancient Egyptians down to present-day despots have used the control of salt as a way to control people. And as is the case with other things of great value, from cattle to gold, salt has entered our language, our literature, our metaphors. END_OF_DOCUMENT_TOKEN_TO_BE_REPLACED