And Called It Macaroni

In the 1700s, visiting the European continent was a sign of culture and worldliness among British youth. Italy in particular was seen as “the place to go,” and anything associated with Italy was unimaginably “hip.” That included pasta, which was universally called “macaroni” in the 1700s. In 1764, a group of terribly fashionable, wealthy, aristocratic young men started gathering in London, to show off their sophisticated, Italianate manners and attire. The group became known as the “Macaroni Club,” and the fantastically dressed and bewigged dandies were called “macaronis.”

The song “Yankee Doodle Dandy” was originally composed as a way of insulting colonial Americans. The Thirteen Colonies were becoming pretty sophisticated by the 1700s, with universities and growing cities, but the British wanted to make sure the colonists knew they would never be as “cool” as the aristocrats in Britain. They smirked that these colonial dandies thought that all you needed to be a “macaroni” was a feather in your cap.

The colonists, when they did eventually revolt against Great Britain, adopted the song as their own. They took pride in the fact that they were not foppish and decadent, like the dandies in London. By the time the American Revolution was over, the British were thoroughly sick of hearing the song “Yankee Doodle Dandy.”

So for those who may have wondered why anyone would call a feather in the cap “macaroni”–now you know.

I have been reminded during recent travels that the convenience of super highways and speedy travel are relatively recent occurrences. Only 150 years ago–a mere blip in the history of human travel–stagecoaches were considered a very modern means of transportation. They crossed the United States, from east to west and north to south, connecting cities and towns and outposts. However, places to clean up, dine, and spend the night were necessary, because transit took days and weeks.

On my trip to California and again on a more recent trip to Michigan, I relived a sliver of this history, stopping at two splendid examples of these stagecoach stopovers–one considerably more rustic than the other, but both remarkable — and both still serving food.

In California, it takes a fair bit of driving on a winding, mountain road to reach Cold Spring Tavern. Built in the 1860s, this is actually a complex of buildings that stood on what was, until 1963, the the only route over the mountains into Santa Barbara. (Hard enough to do in a car; can’t imagine doing it in a stage coach.) Today, while the buildings are still rustic, the menu is very upscale and quite pricey for dinner. I opted for lunch and enjoyed my buffalo burger immensely.

A much different experience was visiting the Stagecoach Inn, in historic Marshall, Michigan. This handsome Greek revival building is impressive even amid an entire main street of impressive, 19th century buildings. Constructed in 1838 and made an inn in 1846, it is the oldest continuously operating inn between Chicago and Detroit. Amusingly, while the rustic Cold Spring Tavern offers an extremely upscale menu, the externally elegant Stagecoach Inn offers simple, though very tasty, bar food. A hand-formed burger and wonderfully crisp sweet potato fries made a good lunch during a break in a long drive. 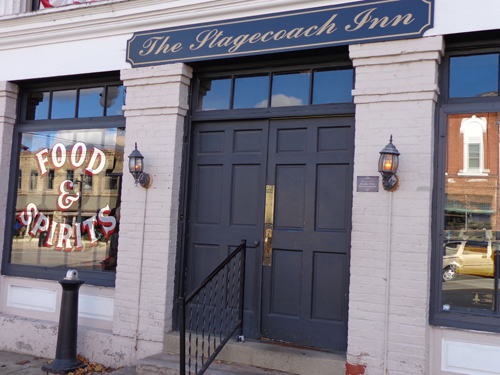 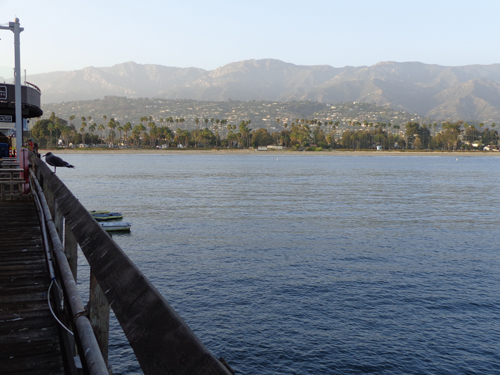 After Ojai, I headed a bit farther north to Santa Barbara. Even here, there would be a bit of history and food research, but also a lot of enjoying the area’s beauty.

I spent many hours at the delightful Santa Barbara Maritime Museum, where I learned about the history, ecology, and ongoing reality of fishing in the area, with information about sea urchins, abalone, lobster, crabs, and numerous tasty food fish. There was also a tremendous amount of fascinating history on non-food topics, including Native American groups of the region, early exploration, wildlife, and numerous shipwrecks. One fact I found interesting was that the Santa Barbara Channel is considered one of the ten best places in the world to watch wildlife, with an abundance of whales, dolphins, seals, otters, and sea lions.

Of course, I didn’t want all my research about local seafood to be purely academic, so I made a point of locating the Santa Barbara Shellfish Company, at the end of Sterns Wharf. 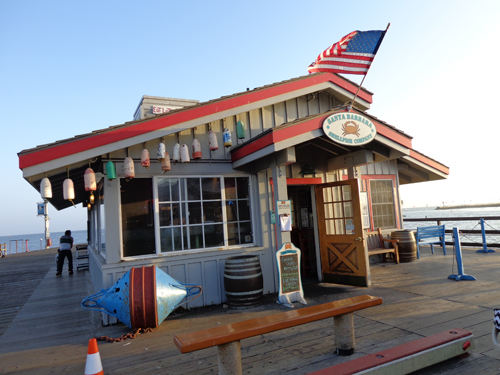 Sterns Wharf offers an amazing view of the Santa Barbara harbor and coastline. And Santa Barbara Shellfish offers a splendid array of seafood options. There were a few items that had been flown in from elsewhere, but I figured there was no point in eating fish from somewhere else when I was visiting the home of such splendid creatures as the Santa Barbara rock crabs. So I grabbed an outdoor seat overlooking the harbor, ordered the day’s special of just-caught rock crabs, and settled into an evening of wrestling with heavy shells and delighting in sweet crab meat. (I also enjoyed watching the sunset as I ate.)

If you get to Santa Barbara, I can definitely recommend this spot. There are many good dining options on the wharf, but the Santa Barbara Shellfish Company is hard to beat for reasonably priced local seafood.

Comments Off on Santa Barbara Seafood